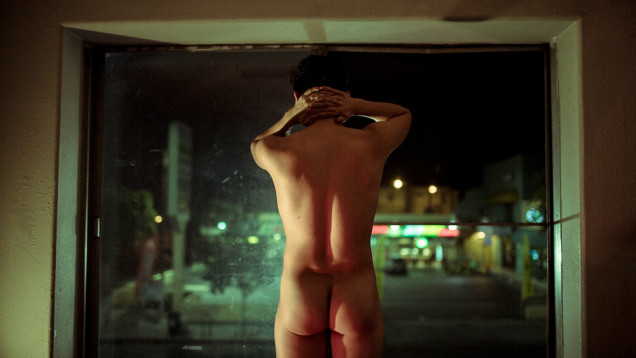 Fallen Blossoms was made as a journey, both in the stories it tells and in the way it was made. The two men – lovers who are not in love (portrayed by Guo Li and James Cowan) – heroes of three episodes in different times and places: In 1978 southern California they escape the city to go and enjoy themselves in a motel; in contemporary L.A they put up a play in a gentrifying neighborhood in the eastern part of town; and in the third episode, filmed in late 2014, taking place in an undefined place, they are victims of a terror attack on a nightclub.

Understanding the complexity of production of the film is substantial for appreciating the qualities of Fallen Blossoms. It was made as a manifestation of the belief that a film is an ‘image’ of the way it was produced and not solely its story or shot-list. A film, as has been argued by Goddard and others, is rather a result of a process. It contains the performances (whether professional actors with a certain technique, or inexperienced amateurs), the locations that could be “sets” or be shot “as is” – serving as a documentations at the same time that they are a stage. It’s a product of the politics and economics of its making. The pictures are a remnant of how things were rehearsed, written, what was the relationship between the “indoors” and the “outdoors”. They engrave the way that time managed during the production process and how this manipulation of time ends manifesting itself in the end result.

The production took place throughout the year 2014, in Los Angeles and Berlin and the production modus itself was transforming with each part of the film:

The first, supplying “vintage” imagery, was produced as an art film. We used sets and followed a trail of archetypical locations: A Hollywood Hill’s house with a pool, A gas station, a freeway, a motel.

The second, aiming at giving the viewer a scent of “faux bohemian life”, was created as a trash-underground production, with the crew taking over the performance residency space PAM in Highland Park and transform it into multiple different locations. Some evenings were created as a show to an attending audience (the theater show scene, the party scene, the naked man in the window scene). The crew (basically two people: Ramzi Hibri the producer of the film and musician Michael DeMaio) lived in the same room where filming took place, throughout the whole month of shooting/performances, as the room was morphing into three different sets. On some evenings their friends would hang out there, play music and get wasted, mirroring, perhaps, the presumed lifestyle of fictional Lucinda and her roommate Charley.

The third part was filmed in Berlin in an abandoned building that used to be a brothel and was by the time of production in the process of turning into an independent cinema club (“Wolf”). Berlin, a city obsessed with faux historicism, race privilege and with its club scene, was the perfect pad for the irony of the third node of the film. The filming was open to the public daily in the evenings after I, the crew and actors had rehearsed the scene throughout the day. The audience would inhabit the same spaces where we were filming as we would perform the execution of what we rehearsed earlier that day.